Mr Sood produced an article for Arthritis Today Magazine (an Arthritis Research UK publication) to help its readers to understand hip replacement surgery including an explanation of the latest advances.  The article answers commonly asked questions about the difference between cemented and uncemented hip replacements and also the different materials used at the bearing surface, such as metal, ceramic and oxinium.

The full text of the article appears below:

To view the edition of the magazine containing the article, please click here 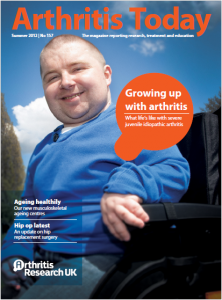 Since Sir John Charnley developed the first successful design in the 1960’s, total hip replacement (THR) has rapidly become recognised as one of the most successful and cost-effective forms of treatment in medicine.  Charnley’s prosthesis consisted of a stainless steel femoral component (stem), with a metal head and a plastic (polyethylene) acetabular component (socket), which were both cemented into place.  This combination of a metal head articulating with a plastic socket (metal on plastic bearing surface) has been a popular choice for hip replacement.

In the early days Charnley didn’t advocate performing hip replacement in patients below the age of 70 years because he was concerned about the phenomenon of wear causing failure (see below).  The concept of a patient, in severe pain and not sleeping at night being “too young for a hip replacement”, however, is one that is difficult to accept, both for the patient and for the surgeon.  THR has since been performed in younger, more active patients.  Advances in technology have been aimed at producing higher performance prostheses.

There is no doubt, however, that the younger the patient at the time of THR surgery the greater the likelihood that the replaced hip will require a revision (“re-do”) procedure during the lifetime of the patient.  Patients below the age of 65 are likely to require at least one revision procedure, based on average UK life expectancy

Advances in hip replacement have, therefore, been aimed at both increasing the longevity of the implant and at making any subsequent revision procedure easier to perform.  This has led to a bewildering array of new prostheses and new terms and it is sometimes difficult for the non-specialist to understand the concepts behind the developments.

Failure of hip replacement due to loosening

The aim, when planning a hip replacement operation, is to implant a prosthesis that will last the patient for the remainder of their life.  Over the years, implanted metal-on-plastic THR’s wear and generate millions of tiny plastic (polyethylene) particles from the bearing surface during normal activities.  Particles can also be generated from the interface between the cement and the bone that it is locked into (cement-bone interface).  Some of these particles are very similar in size to bacteria, so the body’s defence mechanisms are confused and try to eliminate these particles.  They are taken up by defence cells (macrophages) and these cells produce various enzymes in an attempt to “digest” and destroy the particles.  The macrophages are messy eaters and leak the enzymes onto the bone surrounding the implants resulting in bony destruction or osteolysis.  This can cause loosening of the stem or socket and can result in failure of the replacement. The significant bone loss that is created by the enzymes also creates reconstructive challenges for the hip surgeon during revision surgery.

Attempts to eliminate cement debris have resulted in the development of uncemented stems and sockets.  The aim is to create a permanent bond between the implant and skeleton without the need for cement.  This bond can be very successfully achieved in practice, and uncemented components work extremely well once bone grows onto them.   The weak link has been the metal-on-plastic bearing surface.  Most, therefore, use alternative bearing surfaces (see below) with such uncemented components to reduce harmful particle production and hence osteolysis and loosening.  Uncemented THR’s also tend to be used in younger patients.

In an attempt to eliminate production of these plastic particles, and so to extend the life of hip replacements, alternatives to a metal-on-plastic bearing surface have been developed.  Such alternative bearings utilise different materials, such as ceramic.  The combination of a ceramic head on a ceramic lined socket is commonly used, and offers a very low friction-bearing surface, and so, importantly, generates only very small volumes of non-plastic particles that do not elicit a reaction.   Metal-on-metal bearings have also been used, with varying degrees of success.

In addition highly cross-linked polyethylene (a type of plastic that generates fewer particles) has been developed as a more durable alternative to conventional polyethylene.

The latest development is polyethylene which has vitamin E incorporated into it to improve its wear properties.

The metal on metal (MoM) bearing surface had a resurgence as hip resurfacing having first been used in the 1960’s.  Inadequate engineering tolerances led to frequent failure of this combination in the past, but modern engineering techniques have overcome the technical problems of tolerances.  This has led to a bearing that, when lubricated by joint fluid, is very low friction and produces negligible particles.  These bearing surfaces reduce the chance of aseptic loosening.  Resurfacing femoral components are very different in design to conventional components.  They have large head sizes, preserve the femoral neck and lack a stem, so that the femoral canal is not breached.  This, in theory, means that subsequent revision surgery may be easier.

Resurfacing has yielded variable results depending on the type of prosthesis used and the type of patient that it is used in.  The metal-on-metal bearing surface does not generate significant particles, but does produce metal ions.  Some patients (especially patients with smaller components in place, such as women) develop adverse reactions to metal, resulting in failure of the hip resurfacing, and the need for revision surgery.  This seems also to be influenced by the design of some types of resurfacing.  Whilst the Birmingham hip resurfacing, for example, has good published results, the ASR hip resurfacing had much poorer results and was subsequently withdrawn.  The numbers of hip resurfacing procedures has declined over the last couple of years, because of these problems.  Resurfacing using a well-designed prosthesis with good clinical results remains an option in very carefully selected young and very active patients in whom the potential benefits of a more stable low-wearing metal-on-metal bearing outweigh the possible disadvantages.

MoM heads and sockets have also been used with normal stems (as opposed to resurfacing components).  The outcome of this combination may offer poorer results, but, further research on the outcomes and risks of MoM hip resurfacing and replacements is necessary.  Most surgeons are currently not using MoM devices and are awaiting the outcome of the numerous studies that are underway.

It is possible to perform a hip replacement through a small (10cm or less) incision. This is something that some patients find an attractive proposition and surgeons find an exciting challenge.  Mini-incision operations are routine for some surgeons. This technique is more cosmetically acceptable and the reduced tissue damage that is possible can result in a more rapid rehabilitation initially and reduced length of stay.  The important thing is that, whatever the incision size, the components must be implanted and positioned properly, and compromises must not be made in order to keep the incision small.  Specially designed instruments have made mini-incision replacements technically easier to perform.

A number of so called “mini-stems” have been designed that are smaller than conventional stems and so preserve more bone when implanted.  These THR’s are therefore theoretically easier to revise should this become necessary.  Some of these stems are simply shorter versions of existing designs, whilst others are radically different in design and are truly bone-preserving.  Long-term results are not yet available as most of these designs have been on the market for only a few years.

This is a relatively new surgical approach that aims to implant a THR through the front of the hip joint in an operation that involves minimising muscle damage.  The operation is performed with the patient on their back instead of the more usual position where the patient is on their side.  The smaller amount of tissue damage is said to allow more rapid mobilisation after THR.  It has been adopted by some surgeons, but is not in widespread use, and has some disadvantages, such as an increased risk of nerve injury.  Further studies will determine its place.

Accurate positioning of THR components is essential for a number of reasons, such as reducing the rate of dislocation of the THR, a feared complication, and optimising the longevity of the THR. Techniques, akin to a miniature form of the satellite navigation systems used by many motorists, have been developed to help ensure this.  This technology is available and is being used and evaluated by some surgeons.  It is clear that experienced surgeons have a smaller error rate in positioning components and such surgeons do not uniformly believe that navigation offers them significant benefits.  As the technology becomes easier and quicker to use, more accurate and more widely available, however, it may well be increasingly adopted.

Further developments will occur in bearing surfaces with new materials being tested.  Research into the use of diamond, the hardest substance known to man, in bearing surfaces (as it is used in certain drills) has already begun.  Long-term studies of mini-stems will determine if these will take over from conventional stem designs.  Components made of new, improved materials may also appear.

The history of THR shows us that successful implants and techniques inevitably become part of mainstream practice and are available to patients who might benefit.   The most important aspects for success in THR surgery, and joint replacement surgery in general, however, are that an appropriately investigated and informed patient should have an appropriately selected THR implant with a good track record implanted by an appropriately qualified and experienced surgeon using techniques that minimise potential complications and that allow rapid return to activity.

Manoj Sood is a consultant trauma and orthopaedic surgeon and

hip and  knee specialist practising in London, Hertfordshire and Bedfordshire.  For further details go to hipandkneesurgery.co.uk or call 020 71274202.